We use cookies to ensure that we give you the best experience on our website. By continuing to browse the site you are agreeing to accept our use of cookies.

Which are the formulas to compute WHS handicap?

Golf Course parameters   Each officially rated golf course is described by two numbers: the course rating (CR) and the slope rating (SR). The course rating of a particular course is a number generally between 67 and 77 that is used to measure the average "good score" by a scratch golfer on that course. The slope rating of a particular course is a number between 55 and 155 that describes the relative difficulty of a course for a bogey golfer compared to a scratch golfer. These two numbers are used to calculate a player’s handicap differential, which is used to adjust a player’s score about par according to the slope and rating of the course. The slope rating for a golf course of average difficulty is 113   The CR and SR is provided by the field or national federations and is different for each outing of a course for both 9 and 18 holes. Usually they are usually printed on the score cards and on the websites of practically all courses.

Golf player parameters:   The player’s index or real handicap (HI) that is calculated by averaging the individual Score Differential obtained in the eight best results of the last 20 scored in this way, takes into account the trajectory and not only the result of an isolated match. Indicate that you have to score at least three 18-hole games to start having a real handicap assigned.

The Course Handicap (CH) is the one assigned to the player for the course where he will play and is calculated with this formula:

The Individual Handicap (HI) or handicap index is the one obtained in a round and is calculated with the following formula:

Regarding the extra points.   The Result Adjusted to Handicap (RAH) is calculated with the following formula:     The Adjusted Gross Result (RBA) is obtained adding the blows made in each hole but in those holes in which the double bogey has exceeded the par of game assigned to the player for that hole, a double bogey is scored. This prevents them from penalizing the holes where we have very poor results, that is, the equivalent of having 0 Stable Ford points (this is what we know as a line which allows us to raise the ball if this value is exceeded in order to speed up the matches.   The Par for each hole is calculated by distributing the points of CH between the most difficult holes in the field, that is, starting with the holes with the least handicap, to increase the pair of each of them.   As an example n player with HJ 3 would have three points to share, imagine that the three most difficult holes are a pair 3, 4 and 5, in this case would become par 4, 5 and 6 respectively. A player with HJ 18 would have 18 to deliver one more stroke on each hole. One with 20 would have 2 holes with 2 more strokes and 16 with one more and so on.

When abnormal playing conditions cause scores to be unusually low or high on a given day a PCC will be used to adjust the score to reflect the actual players performance.   The PCC will be conservative, un integer value and simple (-1,-2..+1,+2). In mikadi we don´t compute this excepcional parameter.

One the main features of the new global golf handicap system will be a cap that prevents players from rising too quickly. The maximum your handicap will be able to rise in a calendar year, with the global system is FIVE strokes.   It will work by first finding an anchor point, or a player’s low handicap index (LHI). This is the lowest handicap index a golfer has achieved within the last 12 months.   The cap will then limit the increase of that handicap index, again over the rolling 12 month period, “measured against the player’s lowest handicap index within that period of time”. There are two forms of cap – soft and hard.   A soft cap means that when a new calculated handicap index is more than three strokes above the player’s lowest index within the trailing 12 months, the increase is suppressed so only half of any rise above three strokes is applied.   I have a low handicap index of 12 over the last year. But my best 8 out of 20 scores now give me a calculated handicap index of 17.0. In this case, I get an increase of three strokes before the soft cap is calculated.   That soft cap calculation, to get my exact return, uses this formula:   ½ x (Calculated handicap index – (Low handicap Index + 3))   So that’s ½ x (17.0 – (12.0 + 3)). Or to put it more simply: ½ x (17-15) or ½ x 2.   The soft cap, therefore, is an extra stroke (1/2 x 2 = 1) and my handicap increases by four shots (3+1). I’m now playing off 16.   There is also a hard cap, which is the maximum your mark can increase over that low handicap index in a rolling 12 months. That number is five. So it doesn’t matter how many 1/2s you add on in the soft cap and it doesn’t matter how badly you’ve played in the intervening period. You can only increase a maximum of five shots in that period.

What is the handicap for a golf player?

The main purpose of a handicap system is to allow players of different levels of play, both men and women, to compete in balanced conditions.   In stroke play, it is used to calculate a net score from the number of strokes played during a competition, thus allowing players of different proficiency to play against each other on somewhat equal terms. In match play, the handicap difference between players is used to determine the number of strokes the high handicap player should receive from the low handicapper during the playing of their round.   The higher the handicap of a player, the poorer the player is relative to those with lower handicaps. Official handicaps are administered by golf clubs with regional and national golf associations providing additional peer reviewing for low and very low handicaps respectively.   The World Handicap System is expected to launch in January 2020. It is designed to welcome more players, to make golf easier to understand and to give all golfers a handicap which is portable all around the globe.   It will replace the six different systems currently used by over 15 million golfers in more than 80 countries. 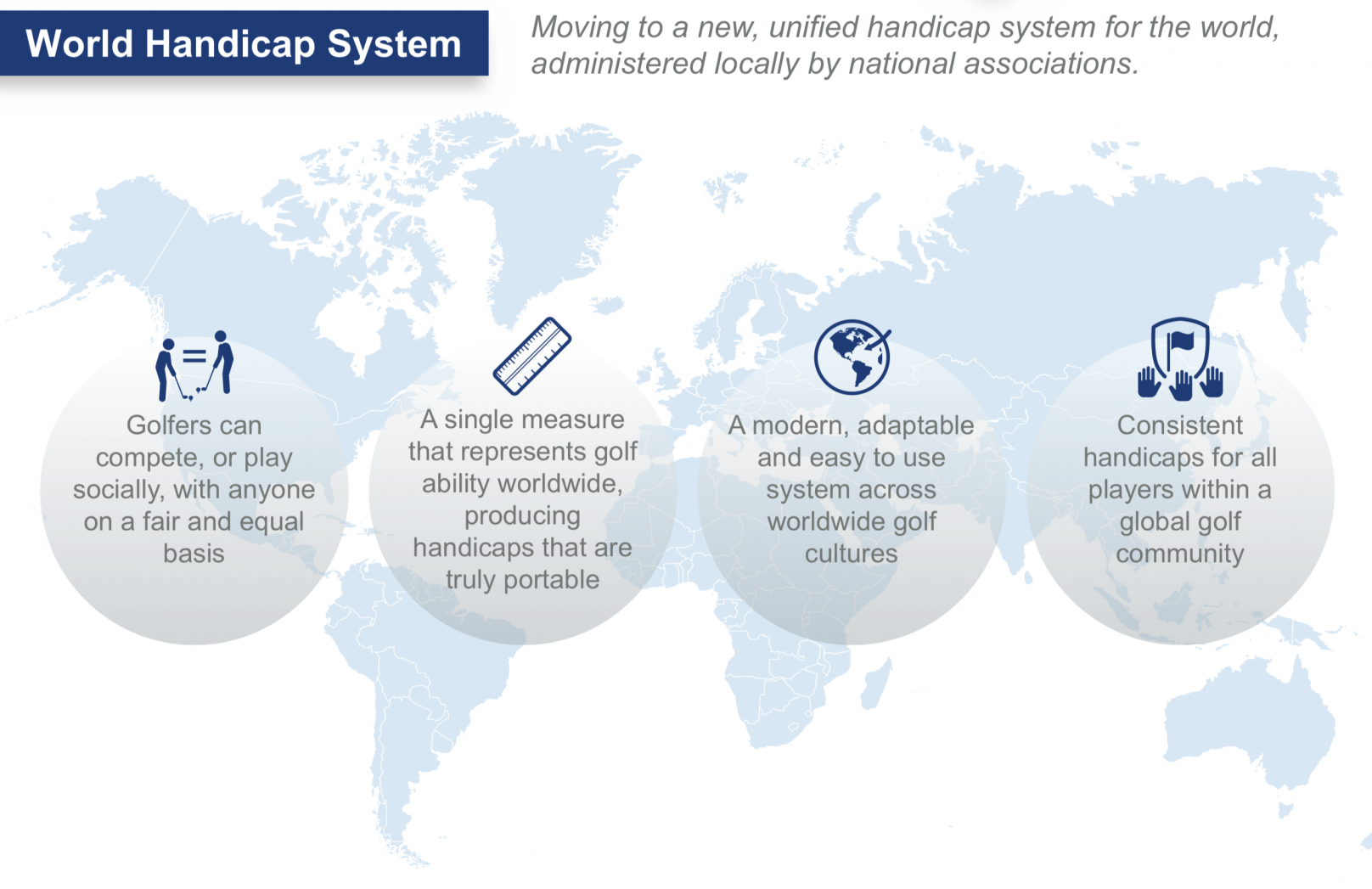 How does the new global handicap system (WHS) work?

On January 1, 2020 comes into force the World Handicap System (WHS), a new way to measure the handicap in a unified way for all countries in the world that replaces all previous ones (USGA, EGA, CONGU, ...).

The new WHS system has these characteristics:

It is global, it can be applied in different fields and countries, this requires that all courses have data from the USGA Course and Slope Rating System that is already used successfully in more than 80 countries and allows introducing weather difficulties if they are relevant.

It is flexible allowing computing both the scores of the tournaments and those obtained in games of entertainment, in this way the handicap of a player adjusts more effectively to his real ability even if he does not play tournaments regularly.

Allows daily revisions and updates of the handicap.   To make the game more enjoyable, the new system will include:

Minimum number of scores to obtain a handicap

Competitive and recreational scores to count for handicap

Handicaps will be calculated from an average of recent scores

The official website of the new World Handicap System is www.whs.com where you have videos and materials that will help you understand this new system. 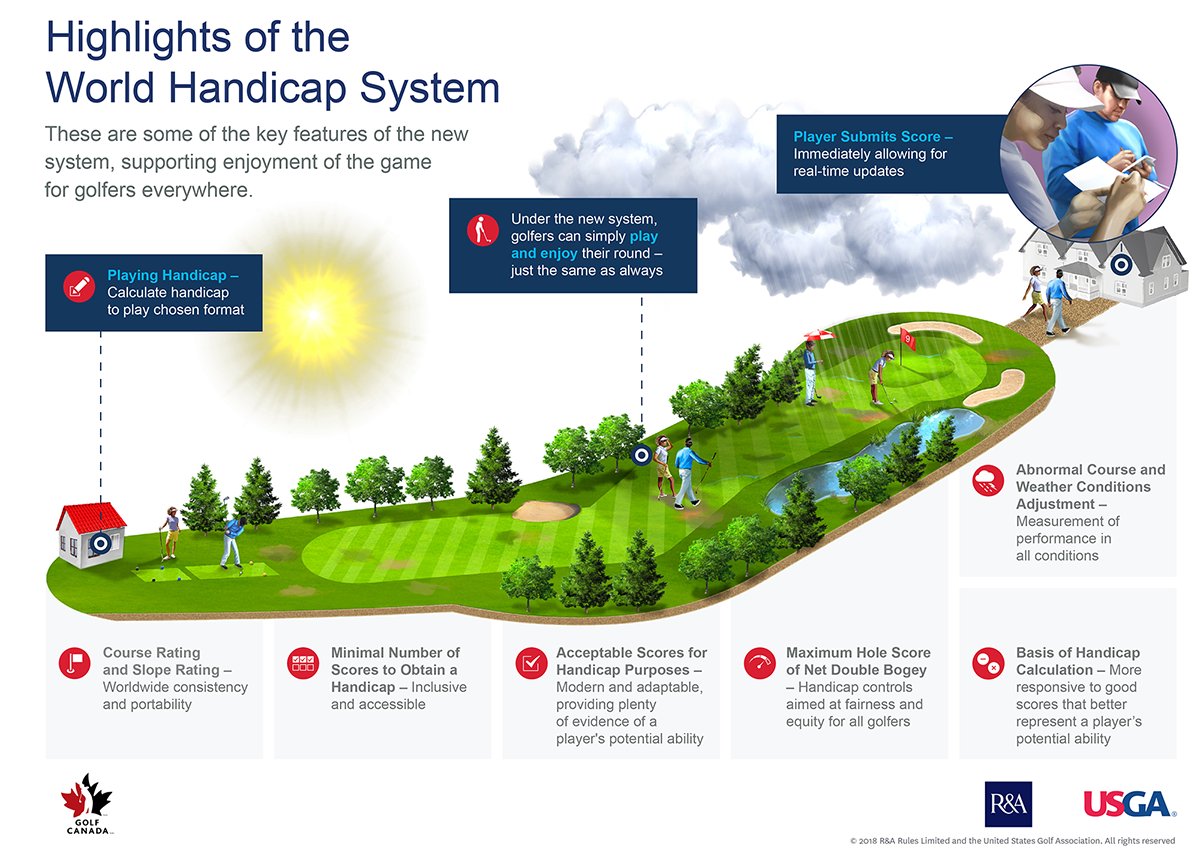